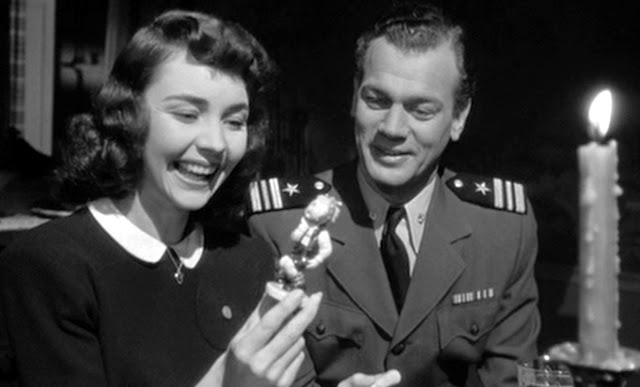 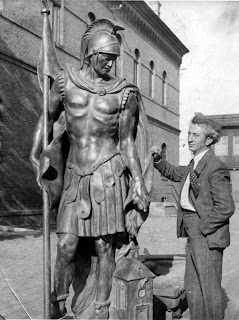 This past weekend I continued more online research. When I visited Vienna in December of 2014, I visited the National Library and found to citing's of Florian and Josef's names in old newspapers. Austria is slowly scanning old newspapers into searchable PDF's - a wonderful resource! At the anticipated rate I had expected it would be years before papers released during the Josephus' most prolific time would be scanned.
I'm up to the time of end of the First World War, and had recalled the two clippings found in December 2014 were about the brothers' return after the war. I had hoped I could relocate the items online in the Library's searchable database. At first I had difficulty in knowing which area to search, the Library assistants there were prompt in answering my email with clear instructions.
So, of to work I went - and what a trove. Apparently, the digitizing of the old newspapers is going well. There are initially 137 hits on the Joseph name in the Library database. I then reviewed each one, downloading the ones that were definitively Florian or Josef....then I compared the download to the online version. Their system shows all the pages, highlights the page where the name was found. I'd then click on that page and the name is highlighted in the text. I'd then mark the same spot in my download PDF so O could study it later.
The result: 75 newspapers issues reference either Josef, Florian, or both!!
My next step is to come up with a simple cataloging system using Excel, then get each of the references translated. Hopefully the yield will be worth it. I was certainly an intense and tedious day of work, but the results were worth it.
Posted by Marc Baron No comments:

I've received the two-volume illustrate history of Red Vienna, The Wonder of Red Vienna (Das Wunder des Roten Wien)  by Harald A. Jahn, which were kindly signed by the author. I had the chance to join Harald for coffee in Café Museum, just off the Ringstrasse near the Vienna Opera House ... and I look forward to another chat with Harald upon my next visit, perhaps at Café Sperl.
Harald's book is a remarkable body of research about the Interwar period of Vienna (1918-1939) known as "Red Vienna."  The two-volume set features extensive color photos of buildings erected during that post World War I era. 1918-1939 was also a very prolific time for the Josephu brothers and some of their work is featured in Jahn's book. 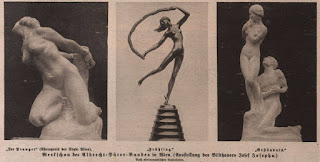 In Volume 1, page 47, Josef's work is featured (pictured above) in a reference to the Albrecht Durer-Bundes, an artists association in which Josef was very active. In Volume 11, page 87, Josef's Zuflucht, located at Trostsrasse 68-70, Pernerstorfer-hof,  is featured along with a photo we gladly supplied; with additional Zuflucht photos on page 110 and 111. 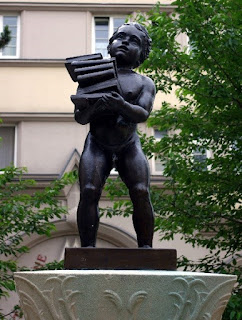 In Volume 1, page 178, Florian's Putto am Zierbrunnen (above) at the Sandleitenhof Library is featured. This work of Florian is also featured in Architektur des Roten Wien by Walter Zednicek on page 147.
Posted by Marc Baron No comments: 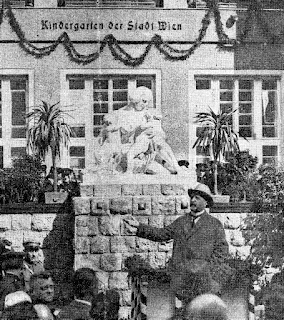 I'm open for doing more talks if anyone knows of a place that would be interested!﻿
Posted by Marc Baron No comments: 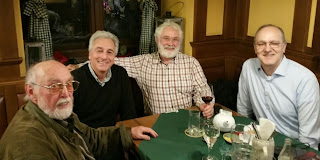